You are here: Home / Motorcycle Accident / A fork on the road and the motorcycle accident

We reached a fork on the road and then there was the motorcycle accident.

The motorcycle ride plan was to go to from Canberra in the Australian Capital Territory to the Gold Coast in Queensland in two days with the aim of catching up with relatives and friends.

We left Canberra at 7.00am and planned to overnight in Armidale.

Watching the satellite rain maps, the day was going to be dodgy, weather wise, so leaving at 7.00am had its merits in getting through the impending rain around Sydney.

All we had to do was to skirt around the Sydney area via Picton, The Oaks, Silverdale, Wallacia, Penrith, Windsor then and we were in the clear from the rain.

My brother-in-law Phil was riding his Kawasaki GTR1400 myself the BMW K1300GT. At Mittagong, New South Wales we stopped for a coffee, checked the rain satellite and left around 9.30am.

One of the things that was working out on the trip so far was testing some bluetooth communications, bike-to-bike. When I needed to speak to the other rider, in this case Phil, I just pressed the button and we were able to communicate when we needed to.

From Mittagong, following the old Hume Highway around Yerrinbool then Bargo, we looked at the cloud front heading our way from the west and decided to high-tail it up the freeway to Sydney to avoid the rain and not skirt around the back way.

Entering onto the Hume Highway around Bargo on the slip lane at 50-60kmh it all happened, we were having a conversation while I entering the ramp, Phil was about 75 metres behind me coming through the corner then suddenly I hear this scraping sound on the intercom.

I looked in my mirror to see the Phil’s motorcycle hitting the armco barrier, and me saying aloud, “that’s going to hurt”, Phil saying something “yes, I’m down!”

Not knowing Phil’s condition, I went back up the ramp. and Phil was standing, “phew”. Thankfully the low-speed saved any physical injuries.

Within 5 minutes the local district rural fire boss drove past, turned the blue and red lights on and within 20 mins and the Bargo Rural Fire Team arrived to deal with the oil spill, what a team!

A big thank you goes to Jason and Michelle from JJ’s Performance Smash Repairs at Bargo and their help. If their friendliness and help is reflection of their service, I imagine the quality of work would be great.

What caused the Motorcycle Accident?

In the post-mortem, the contributing factors were as we saw it:

1. The road surface was very smooth, the road surfaces had that pushed asphalt feel due to the trucks that use the corner. The armco barrier gave evidence that this had been the scene of a recent accident. When I rubbed my boot on the asphalt it glided easily across the surface.

2. It had rained earlier in the morning and as it hadn’t rained for some time, all the oils were brought to the surface. By the time the firefighters arrived, the road was wet from rain.

Why didn’t I have a Motorcycle accident as Phil took the same line as me?

What happened after the motorcycle accident?

We canceled the trip. By the time we sorted out insurance, rental cars for Phil to get home it was bordering on a long trip to Armidale, late into the evening. All up, by the time we had things sorted out with the accident around 9.45am-10.00am,  I was dropping Phil off at Campbelltown at the Hertz rental cars at 1.30-2.00pm all up around  4 and 1/2 hours.

A fork on the road, correction, metaphor or reality

Shouldn’t this title be “a fork in the road?” When examining the ground of the other incidents that had occurred before, one of the fire fighters found this, a fork on the road! Weird. 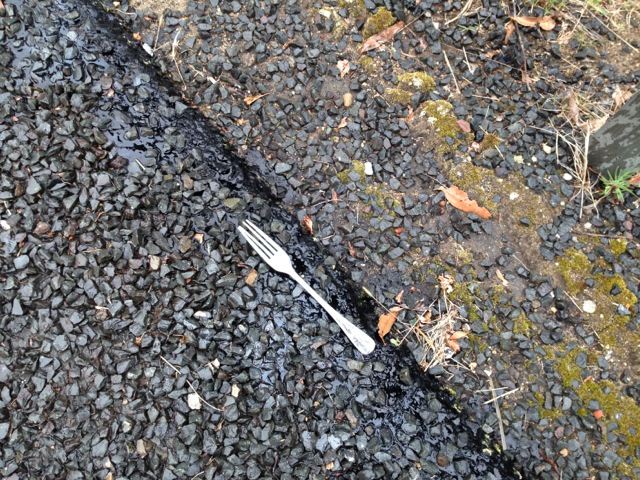