In our previous articles we have been reviewing the use of the iPhone in Motorcycling. Today we will look at the Ipod application on the iPhone.

On a long ride, one of my great escapes is listening to music or podcasts while I’m riding. I find it very relaxing and stimulating while I’m riding. I’ve been listening to music while riding since 1983 where I first pulled apart a set of Radio Shack (Tandy) mini headphones, inserted them into my helmet liner, ran a cassette player in my topbox on batteries with an extension lead to the headphones. It was primitive, but, hey it worked and in all serious it’s not much different than what we’re doing today.

Around 2001 Steve Jobs the Apple CEO changed the course of media and entertainment distribution when he unveiled his creation, the Apple iPod.

Prior to that, media players were clunky and difficult to use.

Media players had their genesis in small tape recorders and micro-cassette recorders, most people who grew up in the 80’s and 90’s would be familiar with the Sony Walkman, which is synonymous with the early media players.

The iPod strength was that it did not store the music on a cassette tape but on media that was either a hard disk drive or a solid-state drive. This meant it held lots of music on a relatively small device. The other strength of the iPod was the creation of the iTunes as an application on your computer to load music on your iPod and the creation of the online Apple iTunes store to download, content (music, electronic books, podcasts (subject matter expert talks) from the internet to your iPod.

When the iPhone was created, the iPod already was automatically integrated into the device as an application, making the iPhone one of the most innovative devices in the market place since its release.

Preparing the iPod for Motorcycle riding

Now for those experienced with the iPod and iTunes, let me ramble on a bit about iPods and iTunes for those who are coming up to speed with the Apple music tools.

1. Think about how to organise the way you want to listen to your music

Before you think about riding off into the wild blue yonder to escape to that special place, you will need to organise the music you want to listen to. With music players like the iPod, you can play your music in album format, e.g. song 1-10, in groups of songs from different albums or  a mixture of singles, or let it choose songs randomly, kind of like a radio station.

2.Use iTunes on your computer to organise the music you want to listen to on the iPod for the iPhone

Just to understand your options for uploading music onto your iPhone you have three choices, load up music by artist, genre or playlist.

Artist and Genre selections are made by selecting what you want e.g,

To prepare the music for the iPhone, you can put your favourite music into playlists.

Do you need to know how to set-up a play

In iTunes you need to set this up before you head out on your ride. The process works like this: 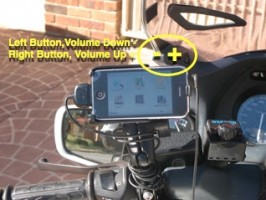 Fine tuning the iPhone/Pod while riding

The only thing you should have to worry about while using the iPod while riding is the volume level. You need to have the volume set so you can hear the music comfortably, however not that loud you can’t hear anything else.

As previously mentioned in the other article on mounting the iPhone, I control my volume by having the iPhone volume accessible on the topside so I can change the volume easily while riding or stationary.

If I have to pull up and talk to somebody, I turn the volume down to zero to focus on the conversation, and then return it to the desired listening level to continue the music.

Observations while using the iPod while Motorcycling.

What now happens is that the music is playing and being controlled by the volume control, when English UK Lucy from GPS tells me when to turn left, the music volume decreases so I can hear her instructions.

One last note! Depending on where you ride in the world, there may some road rules related to the use of electronic devices while driving. Ensure you observe the local road rules. 🙂