The iPhone uses a technology called capacitive touch. This means that an electric charge from the iPhone to your finger creates a circuit to the screen, activates the application; that’s the simplistic view, however, if you’re a geek this page will help you understand it more. http://electronics.howstuffworks.com/iphone2.htm

Now, for those not familiar with iPhones, they have applications that deliver services, for example,

The GPS is an application we will talk about later.

Sounds like a computer; word, excel, outlook, now you’re getting the picture, the iPhone is in fact a small Apple computer!

Now compared to other devices that use touch screens, they rely on pressure on the screen to activate their functions, e.g. GPS devices.

Pros: Nice to use, no pressure on the device in terms of wear and tear

Cons: No good for motorcycling due to gloves being an insulator for the capacitive touch, however there are solutions to possibly overcome this issue.

How to use iPhone applications while Motorcycle Riding

The only way to use an iPhone for Motorcycling is using one primary application at a time. This means before you ride off, you have to activate the application, put your glove on and ride off and let the application do its work while you’re riding.

A good example of this is would be activating the iPod prior to riding off so you can listen to music while you are riding.

To understand the strength of the iPhone is that it can run multiple applications mainly in this primary and secondary type paradigm. The reason Apple chooses to have one primary application open at a time is to conserve battery power. As an example, say it had the ability to have the calculator running, the iPod running and the Internet running all the same time, the Central Processing Unit (CPU) would be working doubly hard thus decreasing your battery life.

To get by this (and to explain it in layman’s terms) they use a kind of a secondary application or background application concept. Lets look at a scenario.

I’m listening to Sgt Peppers Lonely Hearts Club Band by the Beatles on my iPhone using the iPod, my wife, Annette, calls me to pick up some Taco shells on the way home from work for dinner. 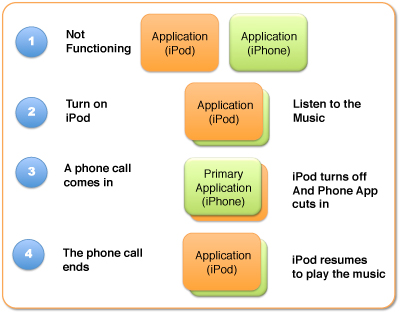 Does that make sense? Good.

So looking at this concept, the primary Applications I use are the iPod and my GPS Application.

In my next couple of articles I will look different applications I use for Motorcycle Riding and give you an idea how they works.

With all this talk of Applications, the question is how long will the iPhone battery last, especially if a phone call comes in while you are riding? Not long.

If you are running a GPS Application it won’t take long to drain your iPhone battery. If you are on a long distance ride this will be a problem.

The only way to overcome this challenge is to provide external power to the iPhone via an adaptor. Here’s what I use.

I then wrap the cable around the RAM Mount adaptor to lessen the cable length.

This allows me to power the iPhone off the Motorcycle electrical system and also charge the iPhone battery at the same time.

I hope this gives you an idea of how the apps work and how to power the iPhone.