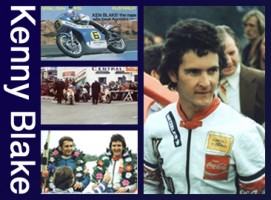 Have you heard of Kenny Blake? Probably not.

In the 1970s, motorcycle racing entered a new era with the rise of the Japanese motorcycles. There was one racer who stood out from the rest, his name was Ken Blake.

Ken, originally from South Australia, came to Melbourne in 1970 to ride a Triumph at Sandown and at Bathurst that year he won the Unlimited GP on a Kawasaki H1R 500. Ken had many successive wins placing him in the category, “Best of the best.”

Unfortunately in 1981, Ken lost his life in the Isle of Man in a racing accident.

For some years Phil Hall from halfofmylife.com maintained a site on Ken and those who knew him used it as a reference site and reminder of his love and passion for riding, and the friend they lost.

Phil approached us to see if we could re-vamp the site. So we did.

You can find it at http://kennyblake.com.au